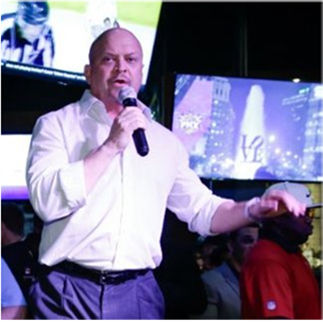 The CEO of the American Sleep and Breathing Academy has a clear mission: Educate and spread awareness of oral appliance therapy and sleep disorders to the public, and to the medical and dental professions. Serving as the ASBA’s CEO for the past five years, David Gergen has leveraged the power of athletic celebrity to shine a bright light on sleep disorders.

With a keen awareness of the popularity of sports in America—particularly the National Football League—Gergen has used his additional role as president of the Pro Player Health Alliance to bring football players to public events and hospital-based gatherings.

“High profile athletes are in the spotlight all the time, and they have the ability to reach the masses,” says Gergen, a dental lab technician by trade for more than three decades. “Dr. Bill Williams, a dentist in Atlanta could not believe how the athletes could get to the media and get the message out.”

There is still a lot of work to do, primarily because the medical profession does not have a good understanding of oral appliance therapy. “They have not been educated in medical school enough about oral appliance therapy,” muses Gergen. “As I work with more and more MDs, I see this to be true.”

Reaching Out to Washington, DC

Gergen will lead a delegation of a committee formed with ASBA members who will be presenting to a Caucus Committee of Congress. Scheduled for Sept 27, 2016, the hearing will likely attract about 70 members of Congress and additional regulators.

Gergen says of the hearing: “Our objective is to make oral appliances the true benchmark for mild to moderate sleep apnea. We know big CPAP manufacturers have their lobbyists to ensure that does not happen, even though in 2006 the government said oral appliances should be a treatment option. We’re fighting every step of the way.”

Earlier this year, under the direction of Gergen, more than 100 comments were submitted by ASBA members to regulators charged with overseeing the transportation industry. “The law makers want solutions and oral appliances are becoming the answer,” says Gergen. “They are paying attention to the problem as evidence by their decision to extend the commenting period online two months ago. I give credit to our ASBA members; they did a great job by being proactive and it paid off.”

When Dr. Neal Seltzer out of Long Island, NY, heard the announcement that the ASBA was going to speak with Congress, he said, “David Gergen has done more for dental sleep medicine in four years than the entire industry has done in 30. He is turning this industry on its ear. Joining the ASBA is one way to encourage that kind of leadership and ensure that the dental sleep community continues to progress in the right direction.”

To those who know him, Gergen’s persistence comes as little surprise. As a former football coach at the pop warner and high school levels (with a national championship on his resume), Gergen was known as an offensive-minded coach, and it’s a strategy that he has long brought to the worlds of business and education. “I hardly ever punted,” he says with a chuckle. “The best defense is a good offense.”

Baker Banks on the Future

The post Baker Banks on the Future appeared first on Sleep Diagnosis and Therapy.

Melatonin as a Bone Builder?

The hormone melatonin is well known for its role in regulating circadian rhythms, but a new study suggests it Read More

The post Melatonin as a Bone Builder? appeared first on Sleep Diagnosis and Therapy.

Readmissions Go Down for Cardiac Patients Treated for Sleep Apnea

The post Readmissions Go Down for Cardiac Patients Treated for Sleep Apnea appeared first on Sleep Diagnosis and Therapy.

Sleep Twitches “Light Up” the Brain

The post Sleep Twitches “Light Up” the Brain appeared first on Sleep Diagnosis and Therapy.

A New Era of Dentistry?