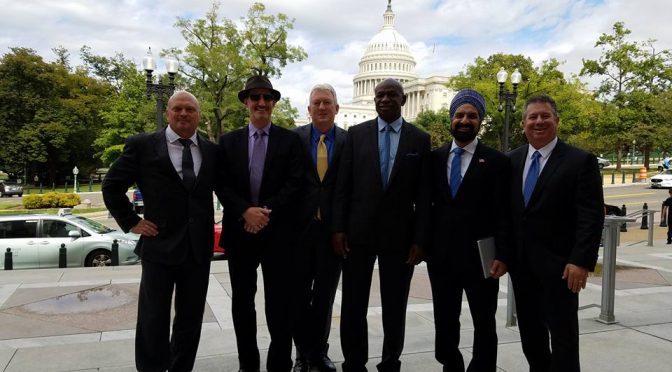 Entrenched opinions in the medical community have a way of lingering well past their prime, and so it goes with the continuing bias in favor of continuous positive airway pressure (CPAP). Simple tradition conspires to keep oral appliance therapy underrepresented in the sleep apnea conversation.

In spite of the resistance, The American Sleep and Breathing Academy (ASBA) continue to make its voice heard at the highest levels. Recently, ASBA representatives spoke at the House Congressional briefing for the House Medical Technology Caucus in Washington, DC, September 27th 2016.

The house congressional hearing was entitled “Innovations in dental sleep medicine to treat sleep disorders”. The Caucus is interested in researching and discovering new treatments for chronic conditions such as sleep apnea. Not only does healthcare innovation save and improve lives, but it also realizes significant cost savings and remains a driver of America’s workforce and economy.

The briefing was moderated by Dr. Elliott J. Alpher Director, the Alpher Center, ASBA Diplomate, ASBA Board of Governors and  Huffington Post Contributor. “As our nation is confronted with increasing healthcare costs, we must acknowledge the epidemic of sleep disorders in America, the huge economic cost to the nation and the role of dentists as a key part of the solution.”

Hearing testimony was provided by the following speakers:

ii. What is Oral Appliance Therapy and how it works and Microrecorder to prove compliance in custom oral devices for OSA – Dr. Neal Seltzer, DMD Long Island Dental Sleep Medicine

Acknowledging that it can be a painstaking process, ASBA officials are educating members of Congress in an effort to share the latest oral appliance facts. With help from Congressional allies, the goal is that Federal Motor Carrier Safety Administration (FMCSA) regulators will add language to an eventual proposed rulemaking document. If advocates get their way, that new comments explicitly endorse the use of oral appliances to treat sleep apnea in transportation workers.

By presenting and commenting on the Advanced Notice of Proposed Rulemaking (ANPRM) of the “Evaluation of Safety Sensitive Personnel for Moderate-to-Severe Obstructive Sleep Apnea” [FMCSA-2015-0419] the ASBAs comments as an industry stakeholder will be placed in the ANPRM docket as part of the regulatory development process, with the objective being, every consideration will be given to the comments received.

“If we can get this information to trickle over to other governmental departments, and the transportation industry listens to us as well; that is our goal,” confirms Kent Smith, DDS, president of the ASBA and owner of Texas-based Sleep Dallas.

As it stands now, many of the larger trucking fleets are encouraging drivers to get tested—even mandating it in some instances. However, companies currently institute these rules on a volunteer basis.

With several high-profile fatal accidents connected to poor sleep, many experts believe a federal mandate governing sleep testing and treatment is all but certain. When that day comes, an acknowledgement of oral appliance validity in the text of a rule would be a major victory for transportation safety, as well as a boon to the business of oral appliance manufacturers and providers.

ASBA CEO David Gergen admits that there are no guarantees in the mission to gain the attention of FMCSA bureaucrats, but the recent Congressional hearing was a necessary step in the right direction. The meeting took place thanks to Dr. Alpher’s regular communication with Rep Eshoo. Dr. Alpher serves on the board of the ASBA and is also on staff at George Washington University Hospital.

For the hard-charging Gergen, these connections represent an opportunity to get the word out at the highest levels of government. “Our next goal is to boost awareness at the U.S. Department of Transportation,” he says. “Again, we want to educate them about truckers and oral appliances.”

The connections help, but it’s the efficacy of oral appliances that catch the attention of all who care to listen. “We presented a study [at the Sept 27 hearing] that came out in 2015 that showed that if CPAP was used for a certain amount of time, and oral appliances were used for that same amount of time, the outcomes were identical,” says Gergen. “That was an eye opener for them. When you factor compliance into the equation, oral appliances should be a no-brainer for mild to moderate sleep apnea.”

Groups such as the American Academy of Sleep Medicine (AASM) agree that oral appliances are excellent options for mild to moderate sleep apnea, and that agreement, along with ASBA’s considerable outreach efforts, are effectively sending the message.

Another part of that message is the power of celebrity, which the ASBA has been uniquely able to generate thanks to extensive connections, particularly within professional football, America’s most popular sport. Former NFL wide receiver Roy Green also testified at the recent Congressional hearing, and Green has joined other NFL greats in recent events designed specifically to boost awareness among the public and clinicians.

Ultimately, Kent Smith believes the message of oral appliance efficacy will resonate with regulators and legislators, primarily because proper sleep is necessary for public safety. “We must keep our citizens more awake on the roads, and the only way you do that is by giving them more refreshing sleep,” says Smith. “It amounts to a public health crisis, and it really needs to be fixed. Someone dies because of a sleepy driver every 70 minutes.

“This is very serious,” he continues. “Apart from surgery treatment to open the collapsing region, there are only two successful therapies for this—CPAP and oral appliances. If you ignore one of them, you’re putting a large portion of the population at risk. That was easy enough for lawmakers to understand, and I hope regulators will come to the same conclusion.”

To conclude, this campaign was initiated four years ago by Drs Alpher and Klein at a meeting in D.C. at Senator Debbie Stabenow’s (D-MI) office. This was followed up by a meeting with the Federal Motor Carrier Safety Association (FMSCA), which led to a further congressional meeting. This mission is ongoing and the ASBA will continue to helping level the playing field for OA’a with CPAP and BiPap.

Telemedicine as Effective as Face to Face for CPAP Compliance?

In the United States and around the world, CPAP compliance is an ongoing problem. Researchers at the Faculty of Read More

The post Telemedicine as Effective as Face to Face for CPAP Compliance? appeared first on Sleep Diagnosis and Therapy.

In a universe of savvy competitors, Somnetics International has managed to carve its niche in the CPAP galaxy with a Read More

Do you want to be the dentist, in your area, to work with NFL greats? The Pro Player Health Alliance http://www.proplayersleep.org works exclusively with members of the American Sleep and Breathing Academy. This ensures that the NFL greats will have the highest quality of care. The ASBA members are … END_OF_DOCUMENT_TOKEN_TO_BE_REPLACED

OSA Predictions from a Poke?

The post OSA Predictions from a Poke? appeared first on Sleep Diagnosis and Therapy.