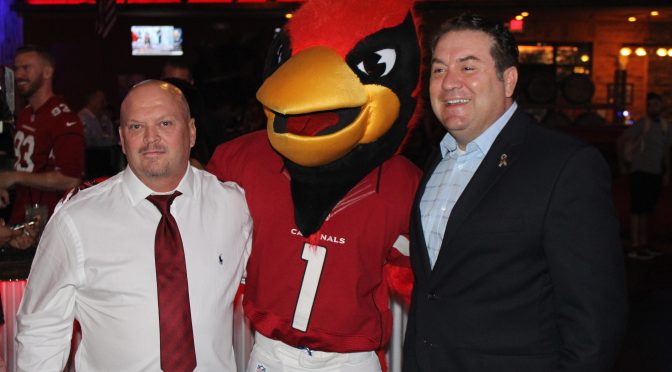 With the favorite pastime of the fall lingering right around the corner how is it possible to incorporate the kick off party to the Arizona Cardinals season, raise money for the Phoenix Law Enforcement Association Charity and connect American Sleep and Breathing Academy (ASBA) diplomates with patients who are in need of sleep apnea treatment all in one event? Easy. Team up with David Gergen, CEO of Pro Player Health Alliance and Executive Director of the ASBA.

September 6, 2016 saw an entire day packed with constant media attention – multiple news channels and journalist were eager to get the word out about such a unique event. The night began with a crowd favorite, Bid Red (the AZ Cardinals mascot), breathing life into Cowboys Saloon located just south of the Cardinals Stadium. Kids flooded the dance floor covered in anything red and danced with Big Red and Lieutenant Holmes of the Phoenix Police Department to fun music.

As people continued to arrive, David Gergen and Lieutenant Holmes showed appreciation for all that attended and announced the sponsors of the event – Arrowhead Pro Sleep Testing and Arrowhead Koala Centers for Sleep Disorders. Both Koala and Pro Sleep were giving away two free TVs at the end of the night, a promotion that generated over 40 potential patients.

Cardinals RB and Rookie of the Year David Johnson, Cardinals legend Roy Green, Ron Wolfley and Derek Kennard delivered a message on the significance of being able to support local law enforcement, what sleep apnea awareness means to them and the excitement leading up to the upcoming season. Many people were stunned by the appearance of Arizona Attorney General Mark Brnovich, but nobody was as surprised as Ron Wolfley about what happened next; Ron Wolfley and one of the Cardinals owners, Nicole Bidwell, were presented as honorary police officers, although Nicole was not able to attend.

The event ended with a players’ reunion in the VIP room, interviews by the press and the announcement of winners in the silent auction benefiting the Phoenix Law Enforcement Association Charity. Overall, the combined efforts raised approximately $14,000 for the charity. The American Sleep and Breathing Academy, Arrowhead Pro Sleep Testing, Arrowhead Koala Centers for Sleep Disorders, Arizona Cardinals, Cowboys Saloon and the Phoenix Law Enforcement Association Charity joined together to make the perfect team and created fun and successful night for everyone who was there.

Announcement: The ASBA Recently Spoke at the House of Representatives on Oral Appliance Therapy

Tuesday, September 27, 2016 The American Sleep and Breathing Academy (ASBA) is continuing to forge a pathway to better sleep nationwide. By providing advanced education to dentists and connecting them with physicians, the ASBA is able to provide potential patients with the treatment they need. Furthermore, public outreach is a key objective of the ASBA … END_OF_DOCUMENT_TOKEN_TO_BE_REPLACED

Night Owls at a Disadvantage?

If you are Bono or Mick Jagger, the tendency to be a “night owl” may be a distinct advantage, Read More

The post Night Owls at a Disadvantage? appeared first on Sleep Diagnosis and Therapy.