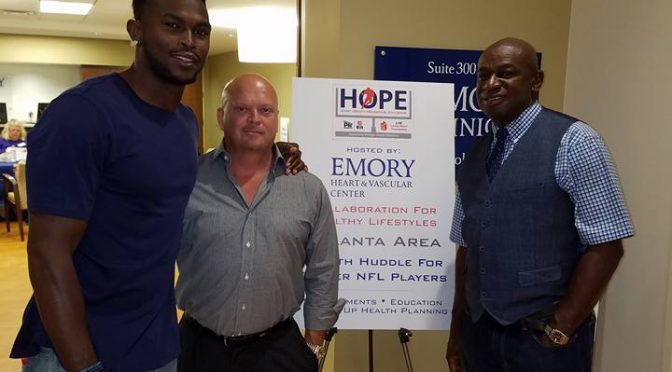 ATLANTA, GA — 45 of 55 NFL players tested positive for sleep apnea during a health-screening event hosted by The Pro Player Health Alliance (PPHA) and the Living Heart Foundation. The Atlanta-based event held was designed to address all facets of player health (not just sleep apnea). Retired NFL players were evaluated for cardiovascular health, orthopedic concerns, and neurological problems before making their way to a sleep evaluation station headed up by Dr. Bill Williams, DDS of Suwanee Dental Care. Dr. Williams, who has been treating sleep apnea for over 20 years, was not surprised by the high prevalence of sleep apnea. “I’m honored to be able to help former players,” said Bill Williams.

“In Atlanta we saw a lot of former players who we will be able to help,” said David Gergen, CEO of the American Sleep and Breathing Academy, Phoenix, Arizona, and president of the PPHA. “Julio Jones and Roddy White came out to support the former players. We brought in home sleep testing equipment and gave it to the players. The results are in and we are already getting oral appliances fabricated. ESPN and NBC were there to cover the event, and it is working well, while also getting better each and every time. Dr. Bill Williams and staff, including Dr. Chad Schalk, Melissa Kremer and Naz Majdi are top quality doctors I know I can trust to provide treatment to the players.” The PPHA focuses on the sleep apnea category, using the star power of current and retired athletes to boost awareness about sleep apnea and oral appliance treatments for OSA.

On Jan 16, 2017, at 6:30 PM yet another sleep apnea public awareness event will take place at Sweetwater Bar and Grill, 2920 Old Norcross Rd, Duluth, GA 20096. “We expect to have Julio Jones, Roddy White, Billy “White-Shoes” Johnson, William Andrews, John Gilliam, Alfred Jenkins, Roy Green, Derek Kennard and Jeff Van Note out and support. There will be opportunities for people to meet the players,” says Gergen. “We will invite the community to come and be a part of it at no cost. The other purpose of this event is to benefit the local fire department. We will donate a free sleep apnea treatment to one of the firefighters who will be in attendance as well as hold auctions and raffles to raise funds for charity.”

Pro Player Health Alliance (PPHA) is an organization dedicated to helping former NFL players, through providing testing and treatment options for those who suffer from sleep apnea. Since launching in April 2012, over 400 players have been treated through PPHA’s “Tackle Sleep Apnea” campaign. Also, the PPHA is dedicated to integrating education and raising sleep apnea awareness, in a fun and memorable way. In addition to the campaign, PPHA is dedicated to testing and getting people who suffer from sleep apnea treated in the general public in communities across the country.

ABOUT SWEETWATER BAR AND GRILL

Since 1996, Sweetwater Bar and Grill in the Duluth / Lawrenceville area of Georgia has been one of Gwinnett County’s top spots for delicious food, affordable drinks, and a fun staff. Sweetwater Bar and Grill is well-known for its award-winning live music venue, karaoke, and comedy night, plus our friendly poker, dart, and billiards tournaments. We feature two well-stocked bars, nine professional eight-foot pool tables, twelve dart boards, and a full-service kitchen that serves food until 1AM (midnight on weekdays). Game fans can jump into all of the big televised sporting events including NFL Package, or sit back at the bar and enjoy Buzztime Trivia and Poker alone or with friends.

Official press release can be found at: https://pressreleasejet.com/news/julio-jones-supporting-former-players-health-at-public-sleep-apnea-awareness-event-hosted-by-pro-player-health-alliance.html

The post New Study Identifies Mechanism of Breathing Muscle Shutdown in Sleep that is Critical for Effective Breathing appeared first on Sleep Diagnosis and Therapy.

Reflections From The ABSM Information Session At SLEEP 2011

This is a reprint of a letter recently published at www.BRPT.org By Cindy Altman, RPSGT, R.EEG/EP T., President-Elect, BRPT . What are your thoughts?: Did the AAST have prior knowledge of the AASM/ABSM decision to develop a credentialing exam that by design is easier to pass? Did the AAST ask the AASM/ABSM to develope such an exam … END_OF_DOCUMENT_TOKEN_TO_BE_REPLACED

Readmissions Go Down for Cardiac Patients Treated for Sleep Apnea

The post Readmissions Go Down for Cardiac Patients Treated for Sleep Apnea appeared first on Sleep Diagnosis and Therapy.

Sweeping reimbursement cuts and a depressed economy have created a perfect storm where payors are now applying more rigorous requirements and heightened scrutiny to billing claims, and referral sources are more discriminating than ever. Fortunately, benchmarking can identify emerging trends in the industry while helping you gain an advantage. There are many organizations dedicated to […]

Evidence linking poor sleep to diabetes continues to mount. The latest research from the University of Newcastle shows that too Read More