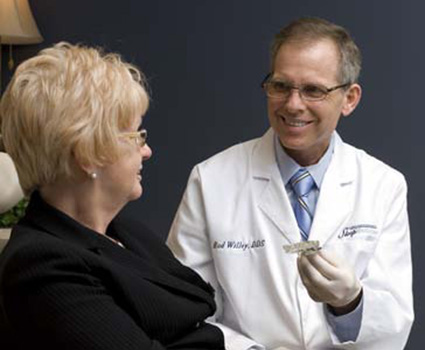 I thought it would be just another presentation until I stood before the group and saw first handed the dynamics and heartbreaking challenges they live with – everyday. Easter Seals provides a yearly meeting for parents of Down syndrome children, and this year they had invited me to give a presentation entitled “Sleeping with Down syndrome.”

Parents of Down syndrome children deserve to be applauded and served well  by all of us.  From birth their child/children suffer with classic OSA symptoms which

often go unnoticed and undiagnosed.  DS children usually have short, wide necks, the airway is narrow making breathing difficult; the tongue is enlarged and swallowing is continuously problematic; the weak muscle tone (hypotonia) from infancy adds to the probability of OSA.

Throughout the presentation, I struggled to keep my emotions ‘in check’ as the facial expressions of each parent seemed to grasp the little bit of hope offered through oral appliance therapy. As the ‘teacher’ for the moment, I became the student, realizing the true struggles this often-ignored and unnoticed group of people encounter each day. Though there is no cure for DS, we as dentist have the training and ability to offer some relief that can make an enormous difference in their world and ours. An estimated 250,000 people in the United States have this condition; Down syndrome occurs 1 in every 830 newborns. Source: http://ghr.nlm.nih.gov/condition/down-syndrome

At the close of the presentation, Tom anxiously approached me and introduced himself as one of the proud fathers of a DS child. Tom then proceeded to tell me his story, “Everything you said described me.” He continued: “I’m an executive at Caterpillar (world headquarters located in Peoria, Il) and I struggle to stay awake throughout the day. I fell asleep at a stoplight, waiting for it to turn green, so my wife began driving me to work. We have 8 children so this was difficult for her.  A few years back, my doctor recommended nasal pillows with a chinstrap; I couldn’t tolerate the chinstrap so my doctor put me on a full face mask, the pressure was at a 22 and complications set in and I found myself unable to were it.

My doctor then recommended our last option, the UP3 surgery. I knew it would be a difficult surgery, but I was desperate and felt like this was my last chance.  The surgery helped for a short time, but then the drowsiness returned.  Last week I fell asleep in the middle of my sentence while talking to a co-worker. My wife and I have decided that I need to retire and apply for disability.” Tom was 51 years old with a great career and large family responsibilities.

A report from Health Advocate explains Tom’s case very well: “Sleep deficits in general are lined to an increased risk of cardiovascular disease, stroke, obesity and hypertension.  These chronic conditions are a major factor in soaring healthcare costs for U.S. companies accounting for 70-80 percent of their overall healthcare costs.” Another eye-opening statement from the same report says: “The effects of sleep loss on work performance are costing U.S. employers tens of billions of dollars a year in lost productively.  Its time for American workers and employers to make sleep a priority.”

My first concern was that Tom was untreated and needed help now. The following day, Tom presented as a patient in my office and we began MRA treatment.  His AHI score was 115.  We delivered his appliance and he returned for his two-week follow up my office.  He was driving again and looked like a different man!  Tom was elated, but I knew he was still in danger so I called his pulmonologist and arranged for a split night PSG using the appliance only for the first part of the test. Tom’s AHI was reduced to a 31 with the appliance alone, then a minimally invasive CPAP(nasal pillows only) combined with the Herbst MRA was titrated and the final AHI was reduced to a 4 with the CPAP pressure at a 10.

In the eyes of the pulmonologist, I wasn’t just a dentist, but rather a sleep specialist, which I could not claim. He saw me as this due to my stand-alone sleep practice, which has my complete focus. We began a series of conversations and determined the best treatment for OUR patient was a combined therapy approach. With the oral appliance in place and functioning as the ‘work horse’ we applied nasal pillows and brought his AHI to a 4. It is important to note that the appliance had to be perfect; I use Gergens Orthodontic Lab because I can depend on the consistency of the product they provide. Combined therapy was the right choice for in this case and I continue to evaluate combined therapy for every case.

At Tom’s one-year recall appointment his AHI was stable at a 4, the appliance was doing all that it is designed to do.  Tom was on his game at work and at home. His wife was no longer driving him to the office and he was staying awake during family time. Conversations about disability were history! As I walked out of the treatment room Tom stood up, put his hand on my shoulder and said, “Wait a minute Doc, I just want to say thank you for giving me my life back.”

Quality of life is more valuable than position, titles, or money. When we, as dentist, can change the course of a life due to treatment that is within our means to provide, what a privilege!  It also heightens our responsibility to society and building relationships with all medical providers.

Physicians have always been protective of their time, and that trend is only continuing in the digital age. So-called Read More

Regulations requiring truckers to be tested for sleep apnea have spread rapidly in recent years, and the movement toward highway Read More

Natus Medical Incorporated (Nasdaq:BABY) today 9/16/2011 announced that it has acquired Embla Systems LLC, a leader in the development, manufacturing, and sales of devices used in the diagnosis of sleep apnea. Embla is the largest company in the world focused solely on sleep diagnostics (Polysomnography or PSG and Home Sleep Testing). The company offers a wide … END_OF_DOCUMENT_TOKEN_TO_BE_REPLACED

From the Washington Post to the Saratogian News, consumer press outlets are continuing a push to boost awareness of sleep Read More